Hello everyone! Ugh, my computer and Blogger have been giving me troubles. I hope everything is back to normal now -_-'

Today's prompt for Blogtober is to write a review on the book that you're currently reading. It can have spoilers, but it doesn't have to (mine is spoiler free)

Let's get into it! 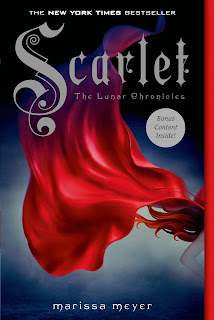 Cinder, the cyborg mechanic, returns in the second thrilling installment of the bestselling Lunar Chronicles. She's trying to break out of prison--even though if she succeeds, she'll be the Commonwealth's most wanted fugitive.

Halfway around the world, Scarlet Benoit's grandmother is missing. It turns out there are many things Scarlet doesn't know about her grandmother or the grave danger she has lived in her whole life. When Scarlet encounters Wolf, a street fighter who may have information as to her grandmother's whereabouts, she is loath to trust this stranger, but is inexplicably drawn to him, and he to her. As Scarlet and Wolf unravel one mystery, they encounter another when they meet Cinder. Now, all of them must stay one step ahead of the vicious Lunar Queen Levana, who will do anything for the handsome Prince Kai to become her husband, her king, her prisoner.

I adored Cinder, it was beautifully written, stunning characters, amazing plot. Meyer did a fantastic job on it.

As some of you may know, if I like the first book in a series a lot, I tend to not read the second one because I know I'll get disappointed. It's hard for the 2nd book to live up to the 1st one.

Now for the plot, it's a bit slow. Yes, yes I know it might get faster and better but at this point, it's very slow which I do not like. Cinder and Scarlet's storyline should have come together already, it's far too slow and lugging. It's beautifully written, I'd just save all that description of Scarlet's red hair for a poem or something.

But what I love about this series is the basing off of fairy tales! If you've read these books, you'll understand what I mean. Cinder-Cinderella. Scarlet-Red Riding Hood, with the Wolf? Wait does that mean Wolf is bad? I don't know, there's a prediction.

This one is not too bad, I like Scarlet. I do think that she might be Lunar because all of the important characters are mainly Lunar. She reminds me a bit of Clary Fray/Morgenstern/Herondale (shut up she's a Herondale, or at least will become one soon), in a good way and a bad way. She makes the same dumb mistakes and remarks that Clary does.

For example, Scarlet thinks she can go off and look for her grandmother all on her own. It doesn't work like that. She's an 18 year old girl going off to protect her grandmother from Wentz knows what, there's no way she can stand up to whatever is in her way, no matter how fiery she may seem. Heck, even Cinder needs some help sometimes. Even Hermione freakin Granger needs some help sometimes.

Captain Thorne. Favorite so far, gotta love him. He was flirting with Iko (teeny spoiler, I guess). He lightens up the mood. He's like the Simon Lewis of this series basically. (I'm still having the feels about TMI sh) Although I don't quite understand what he has to do with the story, is he there as Cinder's sidekick or something? That's Iko's job isn't it?

Okay so my predictions for the rest of this book:

a) Wolf is bad because in the original story the Big Bad Wolf is well, bad.
b) Captain Thorne is extremely important for the story, somehow.
c) Scarlet is Lunar.

I'll do another final review of this next month where (hopefully) all these questions will be answered.

If you do a current read review today, link it down there so we all can see it :D

What book are you currently reading?