Hello everyone! Happy end of May, I hope this was a good month for you and I hope June is even better <3

WELL. it's been a hot minute since ive done one of these, shall we? 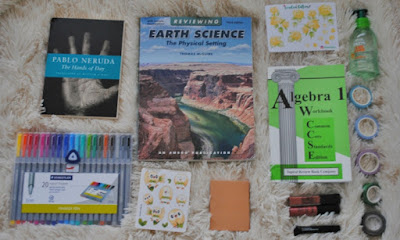 pablo neruda - the hands of day

pure art. It's so good, I need to read more of his poetry asap. (Not going to lie, the reason why I bought this is because a character from my favorite TV show ((How I Met Your Mother)) likes Pablo Neruda). I've had a small obsession with poetry because words are so nice.

I swear, I'm not a nerd but I've had my nose so deep in this book for the past month that it deserves a spot on this list.. whether I like it or not.

These look so cute in my bullet journal y'all don't even know how much I love stickers. And these ones are yellow flowers?? AGHHH

I am a girl with freaking thick hair. And in the summer, I look something like this:

Tragic. But yeah I really need this stuff so I don't look like Hermione Granger and it works. Go purchase, (this is not a #spon) but it's cheap and useful!!

Around finals time I have to do review notes so why not spice up those review notes with color! 20 different colors to be exact. You can create color schemes! And cursive! And doodles! It's always a good time.

THESE ARE ROWLETS. i freakin love pokemon yo.

This one is actually kind of fun. SIKE I HATE IT. It's long and there's no place to do your work. *grinds teeth* But I'd fail my regents without it so.  CURSE YOU SCHOOL SYSTEM.

ya because i'm rich. SIKE I USED HALF MY BIRTHDAY MONEY FOR THIS. But it's so pretty n shiny. And I use it all the time so it's totally 100% not a waste and I'm not a terrible consumer who buys everything in sight. sigh.

These colors are so nice!! The Maybelline one is in Nude Thrill which is a not too light not too dark nude and it goes on soft and dries nicely! The NYX one is in Cannes which is probably one of the nicest colors I own and it is so creamy and soft (probably why it's called a soft matte lip cream). It doesn't dry completely which I actually like :D

NO I AM NOT RICH. It was a free sample at Nordstorm's which I am slowly running out of :( And it's 32 dollars which I really don't feel like spending. Would anyone like to donate to my fund? ^_^

Just. All of the Washi Tape. All of it. It's an obsession I'm sorry.

HOW WAS YOUR MAY? LIKES? DISLIKES? LEMME KNOW. do you watch how i met your mother? LEMME KNOW.

Thanks for reading,
Noor
Written by Noor 6 comments:

what i learned from multiple writing failures 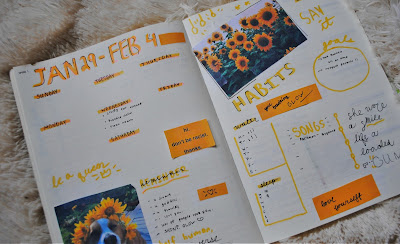 Hello everyone! Back in October of last year, I wrote a post talking about my 2 Horrible Attempts At Writing, and I realized that after not 2, but three failed attempts at writing a novel, I have learned literally nothing. So before I start plotting for Camp NaNo in July, I decided to figure this whole shabang out.

I will always find an excuse to slap a Harry Potter gif onto my posts :))


give your plot some depth

I had a ton of subplots, but none of them really found their way into the heart of the story. It was like a ponytail after a long day, the hairs are sticking out and aren't in the hairtie anymore. My goal is to form a plot that is smooth and pulled back, with all the hairs scenes tucked into place. I love my metaphors.

give your characters a summary but also give them depth

Depth is a theme that I was missing. I formed cute little summaries about my characters but where was the development? All my characters were static except for my main character, and their backstories were vague vague vague. Even if they did have backstories, they didn't fall into the plot. (I see some hairs peeking out)

make sure everything is relevant!

Metaphor number two because we're reading this in English: in Romeo and Juliet (if you're familiar with the full story), Shakespeare doesn't give the reason for the Capulet/Montague feud, because it's not important. Don't include things that aren't important.

If that blue house down the street doesn't have anything to do with the story, don't give a 2 paragraph detailed description of this. (strangely specific but I actually did this in my first NaNo story)

please, it should make sense.

Ok I'm about to call out my 10 year old self right now: a 16 year old living in a suburban town most likely does not have the money to own an underground lair full of weird devices, unless you explain it well, which I did not. IT DOESN'T MAKE SENSE.

My entire plot revolved around that. *facepalm* I'll give myself some credit, I had a wild imagination.

it's not always about completing

I want to make it perfectly that failure does not equal not completing. I did finish 2 out of 3 of those novels. But they were all failures. I failed to create a good story, therefore I was not successful. Even though I completed them.

However, it could be seen as a success because I learned a lot from those 3 stories. epiphanies.

What have you learned from writing? What do you consider a writing failure? SHARE YOUR STRUGGLES WITH ME, I HAVE ICE CREAM AND LOTS OF CARE.

Thanks for reading,
Noor
Written by Noor 8 comments:

a tour of my rad desk

My desk is probably the only part of my room that is consistently clean. I find it extremely stressful to work on a messy surface, and organization with my desk makes me happy and motivated. I honestly consider my desk to be the best part of my room,  even though it's probably where I spend the least amount of time... jk jk.

enjoy this somewhat brief tour of my desk :D 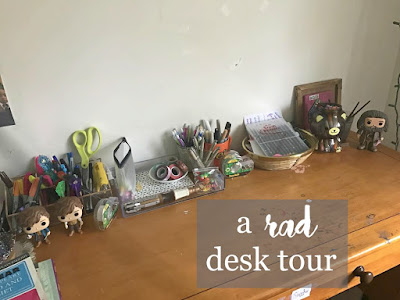 pics may be bad because the lighting was awful and i had to use my phone :(

I have a bunch of things lined up along my wall just so I can have a large space to work, it looks a little cluttered but I promise I have use for all of these things :P 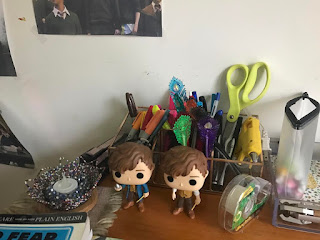 In this corner I have my two Newts (aren't they cute :')) and a lil container from Target with Sharpies, colored pens, highlighters, my favorite Sharpie pens, a glue gun and some scissors! Rose gold is my obsession so when I saw this container I was like I MUST GET THIS. 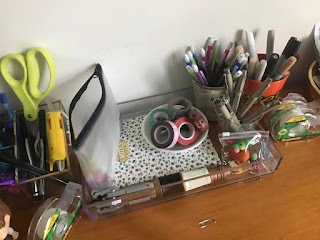 Here's the left middle :D There is a cute little plastic tray, again from Target, the only place you should buy anything :P In the bag are my all time favorite highlighters called Mildliners, they come in like 30 colors and are double sided :0. I have a notebook which I honestly never use but it looks cute. On top are my washi tapes which I cherish with all my heart. And then my Sonic Screwdriver because well, I am a nerd. Then on the right we got some pencils and some neutral markers. (which are also double sided because i'm a cool kid) 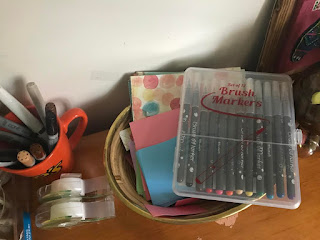 (closeup of the markers) AND MORE TAPE, I am a hoarder. Yet another container full of scrapbook paper.. index cards... and these bomb brush markers which were like 5 dollars so score right. 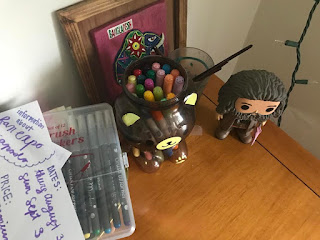 Ignore the right I am attempting to convince my parents to take me to Fan Expo Canada over the summer. #noortofanexpo ANYWAY I have some more markers but they're colorful. And then a lil Hagrid with his lil umbrella :') 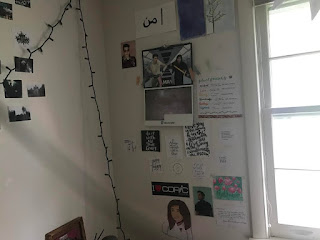 A gross picture of my wall next to the desk! I just have a load of crap like a calendar, some art, and then quotes to motivate myself while I cry work. 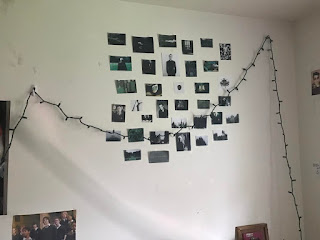 Wall above the desk! I have some fairy lights, and then a wall dedicated to a Draco Malfoy aesthetic because I'm a nerd inspiration.

I hope y'all enjoyed! Let me know what you like to keep on your desk <3 Desk inspo is so relaxing I always look it up on Pinterest :P

BYE HAVE A GOOD WEEK FRIENDS

Thanks for reading,
Noor
Written by Noor 7 comments: 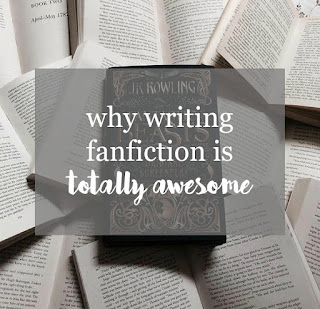 Thanks for reading,
Noor
Written by Noor 12 comments: