Hello everyone! (I literally just decided that I would do this 5 minutes ago so bear with me) In honor of the Raven King (the final book in the Raven Cycle series by Maggie Stiefvater) coming out this Tuesday (even though I already have it because my bookstore blesses me), I'm going to do a countdown thing to it by reviewing each book in the series every day.

We'll obviously start out with the Raven Boys, Sunday will be the Dream Thieves, Monday for Blue Lily, Lily Blue, and then Tuesday for the Raven King. Let's do it. 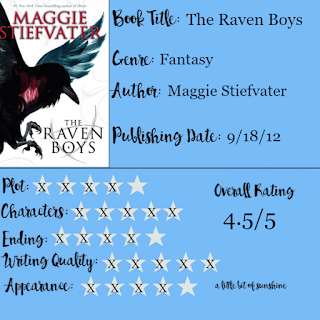 “She wasn't interested in telling other people's futures. She was interested in going out and finding her own.” - Maggie Stiefvater - The Raven Boys

Every year, Blue Sargent stands next to her clairvoyant mother as the soon-to-be dead walk past. Blue never sees them--until this year, when a boy emerges from the dark and speaks to her. His name is Gansey, a rich student at Aglionby, the local private school. Blue has a policy of staying away from Aglionby boys. Known as Raven Boys, they can only mean trouble.

But Blue is drawn to Gansey, in a way she can't entirely explain. He is on a quest that has encompassed three other Raven Boys: Adam, the scholarship student who resents the privilege around him; Ronan, the fierce soul whose emotions range from anger to despair; and Noah, the taciturn watcher who notices many things but says very little. For as long as she can remember, Blue has been warned that she will cause her true love to die. She doesn't believe in true love, and never thought this would be a problem. But as her life becomes caught up in the strange and sinister world of the Raven Boys, she's not so sure anymore.

This book took me on a ride of emotions, I went from okay cool, to okay WHAT, to okay yES, to okay OHMYWORD, to hoLD uP.

I personally adored it, it was dark and wonderful and just overall fun to read and really dragged me into the rest of the series. The whole plot and idea of it being based around a real Welsh folk tale just fascinated me.

Reading the Raven Cycle got me more into Maggie Stiefvater. I had read the Scorpio Races a couple months back and loved it, especially the writing style. Steifvater writes so beautifully, the way she uses words to describe and set a mood to the scene blows me away every time.

do you hear my sobs?

But can we just talk about the plot again, I mean it was so unique and fantastic and I would just really love to know what goes on in Maggie Stiefvater's head that gives her this ability to dream up these wonderful plots. There's ghosts, Welsh kings, ley lines, psychics, romantic tension, the only thing this book is missing is dragons? It's a complex, yet marvelous story.

BUT OH GOSH THE CHARACTERS ARE JUST THE BEST PART OF THE BOOK. They all have their own unique personalities and its so sweet and I just want to cry bye.

Blue - I love how she just doesn't care about like anything. She is who she wants to be and she's so eccentric and the way her clothing was described was so amazing. (i'm actually obsessing over a character's clothing, what have I become) She is my girl crush and honestly I just love her so much.

Gansey - aka cinnamon roll child my child. He is the mother of the group and that's what makes me so happy it just makes me want to curl up in a ball and cry because he's so adorable and precious ugH

Noah - Noah's story just makes me cry. It just makes me want to curl up in a ball and cry (how many times have I used "cry" in this review? far too many). When I read this book, I didn't really have too many feelings towards Noah but that changes fAst in the next book like oh my he's my child (also how many times have I called a character my child? I ought to do it more because half the characters in this book are my children)

My problem was that it got really confusing in some parts. That could honestly just be me because I skim in some parts, but for this book, I had to re-read a lot in order to understand. Especially the ending which was so confusing for me and I had to take it to the wiki to understand completely. But again, that could be me. This was really the only reason this book did not get 5 stars in my book, but obviously, other than that I adored it and would 110000% re-read it again.

until the next time everyone.