Hello everyone! I'll have you know, I had to speed through this book today in order to get this post up. agh. But it's here and it's not going to be great since I'm dead tired but I will do it. For my pride. Where am I going with this? No one knows. Let's just get into the review. Today I will be reviewing/fangirling about Blue Lily, Lily Blue, the third book in the Raven Cycle by Maggie Stiefvater. WHOOP. 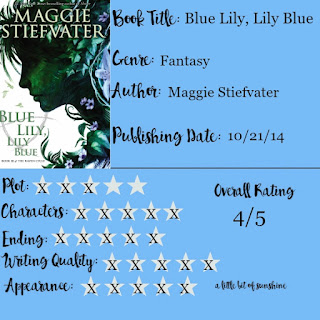 “Desire and dread lay right next to each other in his heart, each sharpening the other.”

There is danger in dreaming. But there is even more danger in waking up.

Friends can betray. Mothers can disappear. Visions can mislead. Certainties can unravel.

Honestly, I didn't like it as much I as I loved the other two. It didn't stick out to me. I thought the plot was a little lame, and nothing was really special, until the ending.

The Dream Thieves was exciting, Ronan's story and how it centered around him was exciting, everything about it was exciting, the whole thing and all the events and how they just put so much action into the story. This was just, not enough?

I really liked it with the hilarious banter and all the dialogue and the relationships between the characters, it was fun to read and fun to flail around laughing because it was just too adorable.

“Gansey was not sleeping.
Because Blue had no cell phone, there was no way for him to break the rules and call her. Instead, he had begun to instead lie in his bed each night, eyes closed, hand resting on his phone, waiting to see if she was going to call him from the Phone/Sewing/Cat Room at her house.
Stop it, he told himself. Stop wanting it —
His phone buzzed.
He put it to his ear.
“You’re still not Congress, I see.”
He was wide-awake.”

But the plot, like said before, wasn't enough. It was just a little filler with a couple big events, that I really enjoyed. Other than that, it didn't pull me in like the other two did, which I was disappointed about.

BIG EVENTS THAT I REALLY ENJOYED - WILL CONTAIN SPOILERS

- The Greenmantle situation. I loved this, I loved Greenmantle's character and how it went throughout the story. He was so casual and I just really liked it and his POVs. But I especially loved Piper, his wife, she was hilarious and really cool and I'm honestly not afraid to say that I really liked her.

- The Gwenllian situation. THIS PART. THIS WAS HILARIOUS AND JUST REALLY INTERESTING. I read the big spoiler and I was like woAhWOaHwoAH. she's who now? It made me so excited and then I read how she was crazy and I was like wonderful. I feel like everything she says is a double meaning and I'd really love to learn more about her character in TRK.

- The whole ending situation. the ending was just, wow. wOW. So much happened, we see Blue's father and we find Maura and Piper (?) dies and Blue is amazing and Mr. Grey breaks my heart. I really love Mr. Grey, and I really hope he will be a fatherly figure in Blue's life. if he doesn't die.

I'M TIRED BUT I HOPE YOU ENJOYED. Tomorrow's review will most likely include tears, fangirling, and a lot of gifs. Be prepared.