Hello everyone! WEEKEND. YES. ALSO APRIL, HELLO. I'll be doing my April Goals next post but I decided to do something different today. Instead of March Favorites, I'm going to be wrapping up which books I read in March, and a little short review as well, let's do it :)


note: I did not add one of the books I read on this list today because I despised it and everything about it I just couldn't put it into words. continue :) 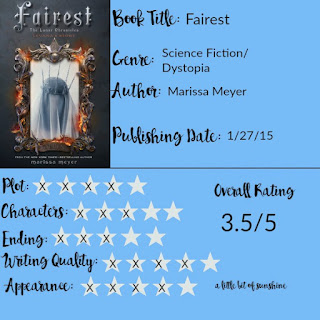 THE LUNAR CHRONICLES MEANS EVERYTHING TO ME. it has taken over my life. Although this book, meh. I love seeing the villian's side of the story, and I think this book did its job by giving me a backstory about Levana. but I wasn't pleased with the whole thing. The plot was weak, she was evil for some odd reasons and the whole book centered around her irrational love for Evret. I mean, don't get me wrong, that was a decent conflict, but it wasn't enough for me.

this book was sad, it was creepy, and it didn't make me change my feelings toward Levana whatsoever except for the fact that I can confirm how crazy she is. isn't it funny how I dislike the books which everyone loves? The only reason I didn't rate this book a 2 or a 3 was because Marissa Meyer is a great writer, great with words. 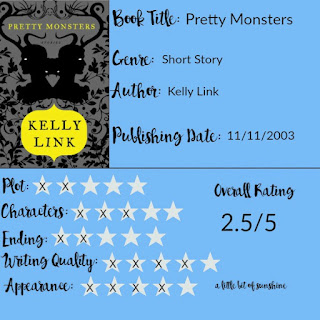 okay first of all WHAT. These stories made NO sense, I mean I could tell there was meant to be a deep meaning to them but I just couldn't understand?? The Faery Handbag was the best one, and the only good one. The writing was good though, the author made everything flow, just not the plots. Most of the stories were quite dull to be honest and I couldn't get into them. I love the cover though. 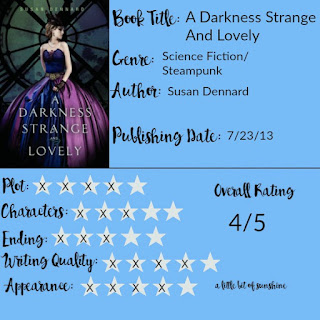 the stars that are off center are bothering me

I REALLY LIKED THIS BOOK. even though this is the sequel and I accidentally read it before the first book, which is why I was so confused. Hah. BUT IT WAS GOOD. I think it may have been the best book I read last month. The character development was outstanding in my opinion. The characters were all loveable as well. (DANIEL)

I also really loved the plot, it was well crafted and THAT PLOT TWIST THOUGH WOWZER. (yes i said wowzer, ignore) Read the book, come to that part in the ending and yes you will say wowzer too. I really regret making the ending only 3 stars because that plot twist deserves a solid 4.

but the love triangle. sometimes I can handle it, sometimes I can't, and this is one of those times where I can't. I won't go into too much detail to refrain from spoiling anything but yes, it's not good. ANYWAY, I enjoyed this book, gonna read the first one now (yikes), and hopefully the last one doesn't disappoint me. *thumbs up* 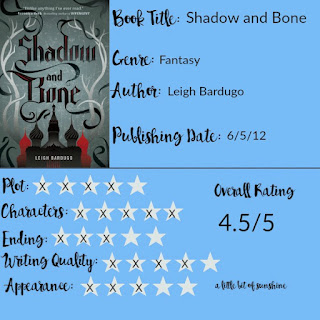 K I LIED THIS IS MY FAVORITE. it was SoO GOOD. The characters, as you can see, I gave a 5 stars, primarily because of how much I freakin loved Mal and everything about him SHWODSN *throws self into the sun* if Alina doesn't want him I'll take him. Although, I found Alina quite annoying. She was rude, over her head and just annoying sometimes, but I think she can be a decent heroine if she develops throughout the series.

and I really wanted to give this a five stars if it weren't for the trope. Girl is plain. She finds special power. She is wowed and worshiped by country. whoop dee doo. BUT I could tolerate the love triangle, in fact I love the love triangle, because I think it just has more of a deeper meaning to it?

anyway, loved it, definitely will finish the series. 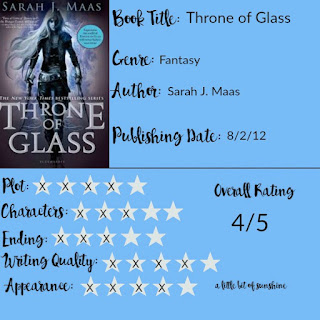 Throne of Glass - Sarah J. Maas hey that has a ring to it
| Goodreads  |

oooh see everyone I know gave this a 5 stars and while I wanted to I just.. couldn't? I had 1 main problem with this book but let's list the good factors first. I thought the plot was decent enough for the first book, the whole idea of the championship and stuff was cool. I also loved the whole idea of the assassin, that was new. It was also written wonderfully (I also quite liked the love triangle in this book), character development was good.

My problem with this book was Celeana. She was annoying in some parts, and some of her actions made me want to throw the book at the wall. she was over her head, and so cocky it made me want to cry. she was treated like a princess???

also I'm having the feeling Dorian is heading towards becoming Draco Malfoy. maybe that's why I love him so much.

HOPE YOU ALL ENJOYED THESE MINI REVIEWS! Let me know if I should do more of these in the future, maybe instead of favorites posts..