To All The Boys I've Ever Loved Before - Spoiler Free Review

Hello everyone! It's been AGES since I've done a book review and I've decided to do more soon, so yay xD Okay let's get into this.. 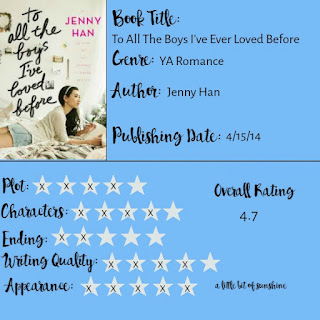 I designed this myself, I hope you like it!

To All the Boys I’ve Loved Before is the story of Lara Jean, who has never openly admitted her crushes, but instead wrote each boy a letter about how she felt, sealed it, and hid it in a box under her bed. But one day Lara Jean discovers that somehow her secret box of letters has been mailed, causing all her crushes from her past to confront her about the letters: her first kiss, the boy from summer camp, even her sister's ex-boyfriend, Josh. As she learns to deal with her past loves face to face, Lara Jean discovers that something good may come out of these letters after all.

Overall, this book was solid. Everything was really nice, I thought the plot flowed, and it most of the time made sense. It fell into very few stereotypes, and the love story was different.

The plot was simple, Lara Jean writes letters to her crushes and keeps them. People find them, she has to face the conflict. I could actually handle the love triangle, which is so rare for me. It wasn't stupid, and honestly I could't tell who she was going to end up with. Like the synopsis says, I like how the letters help Lara Jean learn something and because of those letters, she really finds her true self, and embraces several things about her.

Like I said, the plot overall made sense, and I thought the conflict of the book was quite interesting. The idea of the letters is very unique, and what Han did with the story also made it cool.

I ADORED the characters. They were all so squish and loveable and asdfgjdlk (sorry i'll save the fangirl hey had like their own little cute personalities and I felt all of them grew through the story and they all learned something and sort of connected with each other. Aka, character development was perfect xD Why didn't I give it a 5 stupid me

Okay, as for the ending it really was a no for me. It was just bad and didn't explain much. I mean, endings are hard to right of course but I hated it. The ending was like the climax, (sort of) and left the reader off on a bad note. If you want a cliffhanger to the next book, you want to make it more subtle so the reader doesn't want to rip their hair out :)

I really liked Jenny Han's writing style. The character dialogue was hilarious and made me laugh out loud MULTIPLE times. Han was also very creative with this, like I talked about. I would have never thought of some of the things she came up with throughout the story. Did I mention character development?

Finally, appearance. DON'T JUDGE A BOOK BY IT'S COVER! Yada yada, we all do don't lie. The cover of this book was pleasant. I liked how it depicted Lara Jean's room which is absolutely gorgeous and I want it so bad ahah. Also the font is gorgeous too. (don't judge)

I would recommend this book to people who like a little romance and humor. And if you can tolerate a decent love triangle. If you have no tolerance for love triangles and little stereotypes, you MAY want to steer clear of this book.

I hope you guys enjoyed this little review! Let me know if you want more reviews or possibly some spoiler book talks of certain books, I'd be happy to splurge my feelings.