Death of A Bachelor - Panic! At The Disco: Album Review

Hello everyone! My posting schedule has been way off lately but I swear, once I figure out what to post, I will post it xD I mean of course, my every other day cycle should be on track by Monday.


P!ATD recently released their new album. AND I LOVE IT SO FREAKIN MUCH. Therefore I decided to do an album review on it so I can show you how much I love it and then you can go listen to it and love it too. Alright? Alright.


(Most of these songs do not have bad words in them although a few have other somewhat inappropriate references in them. I will mark those with a *) 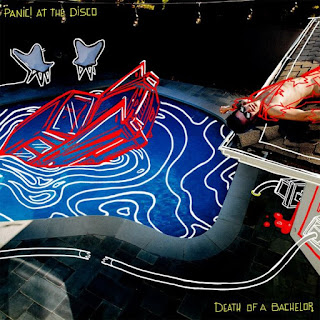 1) Victorious - This was one of the first tracks Panic! released from the album and it was great! It had this really upbeat feeling that gave off that vibe of "victorious". I enjoyed it, it wasn't my favorite but I thought it was nice and catchy.

2) Don't Threaten Me With A Good Time* - THIS SONG IS MY JAM. It's so fun and party like and has such a cool tone that's like a minor sort of thing. The lyrics are also so random and I'm 90% sure Brendon wasn't in his right mind when he wrote this, but I still love it so much.

3) Hallelujah - This was the first song released for DOAB. I think it's really nice and upbeat and has a fun rhythm to it. The lyrics are nice too, not as great as some of the others but they have meaning. (cough cough, DTMWAGT)

4) Emperor's New Clothes - I believe this was the song that officially announced the album so it had a lot of hype. It is an amazing song, I love the beat and the song itself. The message of the song is so interesting to me. Also the music video was freakin amazing.

5) Death of A Bachelor - This song was Brendon's tribute to Sarah (his wife). And Frank Sinatra. The song sounded sad at first but honestly, it had a little bit of upbeatness to it and that's why it's such a great song. The lyrics probably tie with Impossible Year for making the most sense so good job Brendon. And the fact that you can tell he wrote it for Sarah makes the song that much more special. (and those high notes though)

6) Crazy = Genius* - I LOVE THIS SONG. It's so crazy and like circus themed and just wacky and amazing and *takes a deep breath*. Everything about this song is so great, the lyrics are cool, the theme is cool, the key (?) is cool. I wasn't a fan of the little circus intersection towards the end but overall I loved this song.

7) LA Devotee - I love this song again. It gives me a nice cool vibe like I'm on the street or something. Like I'm traveling on a bus in NYC at night or something. I don't know, I just really like it and he talks about my star sign in it so yes. Lyrics are actually really nice and make some good quotes xD

8) Golden Days - Probably my least favorite on the album? I don't know, I like the beat and all I just felt like it dragged on a bit too long. Like he was forcing a long song on the album or something. Yeah, let's just leave it at that, shall we?

9) The Good, The Bad, and The Dirty* - ANOTHER FAVE. Pretty much the same description: love the beat, the music, the lyrics, and wowowow Brendon that voice though. Yeah great song, go listen to it, buy it, love it, cherish it.

10) House of Memories - This is like Victorious for me. I thought the lyrics were nice, and the beat/music was great and all, it just didn't hit me like the other ones did. I don't know, it was spectacular but it's not one of my favorites.

11) Impossible Year - Here it is. The sad one that made you cry. I love this song so much because the lyrics are just so beautiful and I need Brendon Urie to come and sing this for me because wowowow just please oh my. It's the PERFECT sad song and you need to listen to it. K bye.


OKAY that was my DOAB album review! I hope you enjoyed and that you will (you will) go check it out now. Panic! has really reinvented some new things and I love what they're doing with it. A+ Beebo.


ALSO! I created a survey! I'll put the little widget thing here so you can go and check it out :D


It would really helped if you filled it out! Plus you get a cookie at the end ;) Thank you :D


Thanks for reading,
Noor
Written by Noor