Hello everyone! *SCREAMS* this book This doesn't need an introduction, if you haven't heard about this book, you've been living under a rock. (it's the script for the new harry potter play.) ahem let's just get into it. 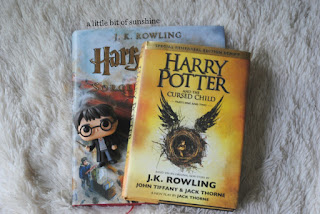 It was always difficult being Harry Potter and it isn’t much easier now that he is an overworked employee of the Ministry of Magic, a husband and father of three school-age children.While Harry grapples with a past that refuses to stay where it belongs, his youngest son Albus must struggle with the weight of a family legacy he never wanted. As past and present fuse ominously, both father and son learn the uncomfortable truth: sometimes, darkness comes from unexpected places.

This book was a rollercoaster of mayhem and confusion. It will contain spoilers. So if you haven't read the book yet, go read it so we can all talk about it together :)))

Despite all the fan comments about the format of the "book" getting in the way of the reading experience, I personally didn't find it that complicated. It's not that different from a normal book, and I see no way how you could find it difficult to read. Of course, I wouldn't prefer this format over a normal book format but it is tolerable.

But I can see the fan disappointment with this book. It included more mature themes and had things that weren't as magical as the other books, which doesn't necessarily make it bad it just made it different. A lot of the Harry Potter fans who read the books when they originally came out are in their late teens, early twenties by now so it makes sense that the book seems more "adult." Maybe adults got more out of it than kids did.

I never really needed anything more from Harry Potter, I had fanfiction, all seven books which ended PERFECTLY. It was good, it was nice, it was Harry Potter, I'm not complaining. But I was satisfied with the series, I didn't need this.

But I still enjoyed it, nonetheless. 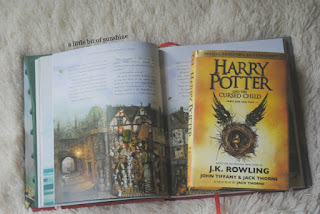 Let's actually talk about the plot.

The plot, for the most part, was decent. But it didn't feel like a Harry Potter book. Now I get it, there were different writers, it's a different thing. But every single thing in a Harry Potter book connects together to create the ending, it's a perfect puzzle and this wasn't it.

Speaking of, did the two of them really think that they could save Cedric and nothing would go wrong?? Yeah, I get they were only 14 but seriously any wizard. any human being in their right mind would know that if you meddle with time, stuff's going to go wrong. And why Cedric? There were hundreds of other people that Albus could have saved that "died for Harry" but Cedric? Sure Amos came into Harry's house asking him to save Cedric (mind you, he's 60 something and he thinks that Harry can meddle with time and get away with it...). But still, I mean really, out of all things. It could have been a stupid, extra special act of teenage rebellion coming from Albus. but really

Other Things That I Despised

- How come Ron was the DUMBEST GUY?? I was never fond of him and I always believed that he was there for comic relief but in this one he was just dumb? Like COME ON give him something for gods sake, he was just standing there like an idiot making stupid jokes. At least in the original series he did things like saving Harry. It's like the writers were just mocking him, especially when Albus was "being him" with the Polyjuice Potion. It disgusted me, they made a fool out of one of the main characters. Ron is allowed to be the funny guy, but not the dumb funny guy who does nothing but stick by Hermione's side and follow her around like a stupid sidekick.

- This is minor but the trolley witch? she doesn't even know her own name? whaTTT. That made me so freaking sad like why would you do that? why?

- Harry being a horrible father. Based on the epilogue, I expected Harry to be a wonderful father, he seemed caring and loving.

I never in my life would imagine Harry being anything but that, like it was so horrible seeing one of my favorite characters being trash like that I mean it was bad. Especially in the alternate reality when he wouldn't let Albus be friends with Scorpius (seriously). Some of the things he said and did made me want to cry.

- WHERE WAS EVERYONE ELSE???? The main reason that I wanted this book was to get a story about all of the next generation kids. The whole story focused on Albus and Scorpius. Rose was in it for .2 seconds. I think Hugo was mentioned once. Poor James and Lily barely got any dialogue. AND WHERE WAS TEDDY? I wanted to read about him so bad but no, nonexistent.

those things took away that one star that made me give this book 5 stars, it makes me sad, but even if it is Harry Potter, the thing I love the most, I have to be an honest rater :(

anyway, let's move onto the happiness, the positive things that made me give this book those other 4 stars :D 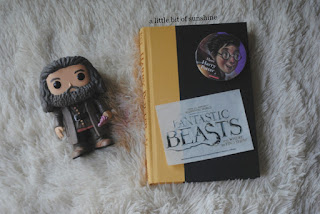 Things That I Absolutely Loved

- The Malfoys !! I've always been a sucker for Draco Malfoy, he was my favorite character in the series and still is and I love him loads. BUT I ALSO ADORE SCORPIUS. I honestly thought he brought all the good out in Draco and showed the fans that Draco is more than what Rowling depicted him as in the books. He found something to love and truly care about and that was Scorpius. Draco learned from Scorpius and I loved it so much I could cry about it for days, it was to me, the best part of the book.
Some quotes from the Malfoys

“Draco: Astoria always knew that she was not destined for old age. She wanted me to have somebody when she left, because . . . it is exceptionally lonely, being Draco Malfoy. I never realized, though, that by hiding him away from this gossiping, judgmental world, I ensured that my son would emerge shrouded in worse suspicion than I ever endured."

"Draco: And being alone — that's so hard. I was alone. And it sent me to a truly dark place. For a long time. Tom Riddle was also a lonely child. You may not understand that, Harry, but I do ..."

"Scorpius: I am--Scorpius the Dreadless. I am--Malfoy the Unanxious...What's the worst they can do? Bring back Moldy Voldy and have him torture me? Nope."

"Albus: No. They’re not true. And I’ll tell you why. Because I don’t think Voldemort is capable of having a kind son — and you’re kind, Scorpius. To the depths of your belly, to the tips of your fingers. I truly believe Voldemort — Voldemort couldn’t have a child like you.

Albus: And it’s something I should have said a long time ago. In fact, you’re probably the best person I know. And you don’t — you couldn’t — hold me back. You make me stronger — and when Dad forced us apart — without you —

Scorpius: I didn’t much like my life without you in it either."

- HERMIONE GRANGER !! Hermione was all I expected her to be: strong, independent, and Minster for Magic. She was fierce and didn't need any one to boss her around. She was probably the character that most closely resembled how she was in the original books. She was the Hermione Granger that I fell in love with when I was 8 years old and I applaud the writers for doing that for me.

"Hermione: If this is your way of saying you want a marital break, Ron, then, to be clear, I will skewer you with this quill."

- The whole thing with Delphi. Even though this was disliked by a lot of fans, I thought this was interesting and different. The whole idea of Voldemort having a daughter with Bellatrix does disgust me but intrigued me at the same time. I did like it and how it added a whole new thing to the plot, something which I wouldn't really think that would be in the original books.

Overall, this book gets a 4 out of 5 stars. It was't horrible, but it wasn't what I expected it to be. They could have done better. But the Malfoys and Hermione were a few things that they did right.

Let me know if you've read this book and what you thought of it, I'd love to discuss it with you all :)

(this review took me like 2 hours to write, I'm pooped)
Written by Noor