Hello everyone! LONG TIME NO POST! I'm finally back with another review, this is an older one I did back in April but it's of one of my favorite books of all time, Carry On by Rainbow Rowell. 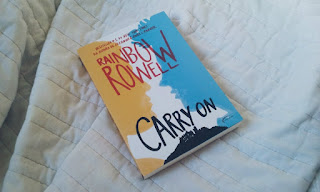 I am currently writing this review in my grave.

Honestly, I haven't rated a book 5 stars in a while, and this one 110% deserves the 5 stars. I give it a 98%, because just about everything was fabulous. It was funny, adorable, and the plot was decent honestly.

I went into this book thinking that this was going to be yet another Harry Potter knockoff. And trust me, it was, but in the best way possible. I feel like Rainbow referenced Harry Potter quite a bit, on purpose and I didn't write them down, but I did catch a Twilight reference in there:

First, the plot. I had my issues with it, mainly because I somewhat felt that it didn't have enough to it. I mean, I was 70% focused on the drama and the love, but I needed more action. I did love how Rainbow put it all together like a puzzle and it just all fit. Basically I found myself screaming "OH" or "IT ALL MAKES SENSE" 3000 times throughout this book.

And then the Mage and the Humdrum. You start out the book with this view of the Mage as Dumbledore, the advisor, the one who will teach Simon to be the greatest wizard (er Magician) and beat Voldemort (er the Humdrum). BuT things take a turn and that's not how it goes, because the Humdrum is in fact not all evil but the Mage ends up being this powerhungry man who you can associate with Voldemort in a way. I love it, Rainbow Rowell blows me away again. That was such a smart and interesting way of putting the twist on the whole HP plotline stuff.

ALSO, the characters? They just made me happy inside. I mean Penelope was just so great, she was confident and driven to get things done and that's what I loved. She's one of those characters that you just connect with, Rainbow Rowell is fantastic at doing that.

SIMON AND BAZ'S RELATIONSHIP?? AKA ME DEAD??  It was so adorable and I was just flailing everywhere whenever something cute happened. iT'S JuST sO AdOraBLE like. It's so, I can't explain it?

Well, I adored this book and I'm quite sad it was a standalone because honestly I would have loved to see it as a series. But the ending was wonderful, it ended , unlike other Rainbow Rowell books... (*cough* Fangirl) I was able to pull away from viewing it as just Harry Potter and seeing the characters as they are, Simon as Simon instead of Harry. Baz as Draco instead of Draco. Penny as Penny instead of Hermione.

Let me know if you've read Carry On and how you liked it, I certainly did. I'll be posting regularly this month since I basically have nothing going on, yay.