Mockingjay Part 2 - The Movie With ALL the Feels

Hello everyone! So. I went and watched Mockingjay Part 2 on Wednesday. And it actually made me cry. The only movie I have ever cried over was Deathly Hallows Part 2, but this one took second place.

Note: The first part of this will be strictly review, I will alert when the spoilers begin.. 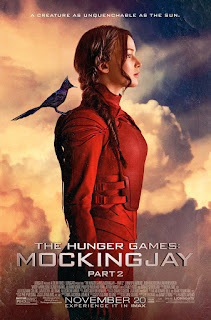 Movie Title: Mockingjay Part 2
Release Date: November 20, 2015
Director: Francis Lawrence
Description: Realizing the stakes are no longer just for survival, Katniss Everdeen (Jennifer Lawrence) teams up with her closest friends, including Peeta (Josh Hutcherson), Gale (Liam Hemsworth) and Finnick for the ultimate mission. Together, they leave District 13 to liberate the citizens of war-torn Panem and assassinate President Snow, who's obsessed with destroying Katniss. What lies ahead are mortal traps, dangerous enemies and moral choices that will ultimately determine the future of millions.

It originally came out on Friday, but my theater was offering a special two movie feature where they showed MJ Pt 1 and Pt 2! So we went on Wednesday the 18th instead.

This movie was fantastic, the effects, the acting, everything was perfection. Some of the dialogue was also really beautiful and sometimes funny.

It stayed pretty true to the book, (I am going to admit, I didn't finish the last Mockingjay book. I know gasp.) I was happy with that factor.

First off, I'd like to say about how much I appreciated the effects. They were very well done and super amazing and left me going 'woah' all the time.

There was this one scene, I'm not going to spoil anything, but these was this rushing oil that was amazing. It looked so real, and put a lot of action into the scene.

small spoiler if you haven't seen Part 1 Josh Hutcherson was an amazing actor in this movie. His role as Hijacked Peeta was perfect and he captured the role amazingly. We could see how he was damaged inside but fought himself to find that love for Katniss. That actually made me cry a bit during some of his parts.

Jennifer Lawrence was flawless in this movie (except for one little scene, but sh). All her outfits were gorgeous and the makeup was really natural but made her glow. She was also really powerful with her speeches and I felt like Katniss was really coming out of her shell and embracing who she was.

Surprisingly, I really enjoyed Gale's part in this movie. He was really strong and important for everything, because without him, Katniss would probably not be alive.

AND CAN I JUST TALK ABOUT CRESSIDA AND HOW MUCH I LOVE HER. She's so gorgeous and her hair is like ahh. She totally sympathizes with Katniss. She's so much more than just Katniss's manager, she's her friend, and she's a warrior too.

There was also a lot of comic relief in this movie which made me laugh a lot. Haymitch always brings back the laughter in the Hunger Games and that's one of the main reasons why I love him.

One thing I didn't like was how it was slightly boring. The actual Games brought all the action and fun to the series and this movie was all about war and rebellion which made it slow and boring at times. It was still fantastic, I just wouldn't recommend it to someone who loves action movies.

Overall, I'd rate this movie 4 stars. Everyone's acting was great, the special effects were phenomenal and it was very moving. It was a bit boring, but if you're able to look past the lack of action in some scenes, this movie is for you.

SPOILERS. DO NOT READ FURTHER IF YOU HAVEN'T WATCHED MOCKINGJAY PART 2 OR READ THE MOCKINGJAY BOOK 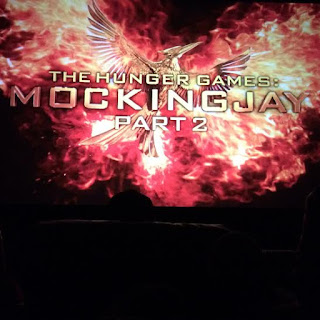 my crappy picture that I took from the theater

all the deaths. oh my. Finnick's death actually made me cry, like I am not even joking. Through the whole mutt scene, I was holding my mouth and crying because I knew what was going to happen next. And when he yelled Katniss after he died oh my god I can't

Hijacked Peeta, that was oh. It made me so sad to see how Katniss would actually point her bow up at Peeta because she felt threatened, that was horrible. And then during the mutt scene when Peeta was saving Katniss, that was cute and I thought that was the end of Hijacked Peeta, thankfully.

And President Coin's death scene. I was trying to hold back a smile the whole time because I knew what was going to happen. My friend was literally staring at me like I was crazy. When she killed Coin and Snow started laughing, man that was creepy, there was like blood dripping out of his mouth ew ew *shudders*

I didn't cry during Prim's death because I knew it all along and it was so predictable and it wasn't that sad of a death to be honest. And then Katniss beat up Gale about it and that made me so sad because it wasn't his fault, he didn't know and *sobs*

The only part of the movie that was crap was when Katniss was shouting at the cat. That was not good acting at all on Jen's behalf and it was pretty corny to be honest.

BUT THE EPILOGUE ASDFFGHHN. That was the cutest thing ever, Katniss with the baby and Peeta playing with the kid. The scene was gorgeous and Katniss and her family looked so happy and cute and ahh I loved it. #everlarkisotpandyoucanttellmeotherwise (But Katniss's dress was kind of ugly)

END OF SPOILERS, YOU MAY READ ON

There you have it. The end of an era. The end of the Hunger Games. No. It will live on forever and ever, our legacy as Tributes will continue. *does the three finger symbol*

I hope you guys enjoyed and let me know if you have seen it or are going to see it so we can fangirl together about it later! And please don't spoil anything in the comments for people who haven't seen it, thank you :)

As for NaNoWrimo, I'm doing something crazy today. I'm tackling 50k. Which means I'm going to have to write 9,315 words today. Wish me luck, I will update on Tuesday.

Never forget the era of The Hunger Games guys, it will always be in our hearts <3

Thanks for reading,
Noor, District 13
Written by Noor