Hello everyone! Today I am doing a post on MLK but before I do that, I just wanted to give a direct message to Hannah and Neal. Yes, those are your names, I'm so sorry that I couldn't add the links. As you all know, today is Martin Luther King Day. Today I am going to talk a little about him and his importance for the history of America.
Disclaimer: For non-Americans (I know I have a lot of readers who are) this might be awkward for you. 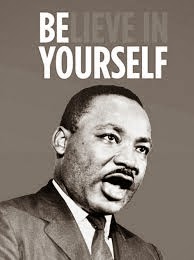 i didn't create this amazing picture
Martin Luther King was born on January 15, 1929 in Atlanta, Georgia. Dr.King grew up in a world of segregation between whites and blacks. He was treated unfairly as a young child and wanted to do something.
His father was a priest, so because of this religious influence, Martin believed in non-violence. His role-model was Gandhi, and he became the Gandhi of the 20th Century.
He grew up to become a strong leader, who lead his people to freedom.
But I'm sure, that most of us remember him for his amazing speech I Have A Dream.
﻿
"I have a dream that one day this nation will rise up and live out the true meaning of its creed: "We hold these truths to be self-evident, that all men are created equal."
I have a dream that one day on the red hills of Georgia, the sons of former slaves and the sons of former slave owners will be able to sit down together at the table of brotherhood.
I have a dream that one day even the state of Mississippi, a state sweltering with the heat of injustice, sweltering with the heat of oppression, will be transformed into an oasis of freedom and justice.
I have a dream that my four little children will one day live in a nation where they will not be judged by the color of their skin but by the content of their character."
-Dr. Martin Luther King Jr
source for speech
I hope you all enjoyed today's post remembering the great Martin Luther King Jr. Wednesday, I will be back with Jollygirl's blog party so stay tuned! (Also, thanks for 30 followers!)
Thanks for reading,
Noor
Written by Noor