the ninth grader's love hate relationship with shakespeare: interviews with kids in my english class

I'm currently delving through Shakespeare's Taming of the Shrew for English, and let's just say I love it and I hate it. Shakespeare was a great writer, there's no doubt about it.

SO FOR FUN. and for extra credit. I asked every kid in my English class if they liked or disliked Shakespeare, why they do, and if they plan on reading more of his plays in their spare time. 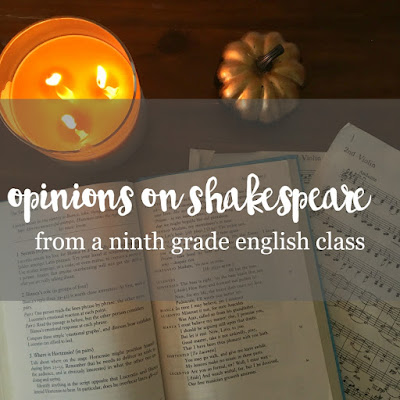 "I don't hate Shakespeare, but it is a strong dislike. The strongest of dislikes. It's just... boring."

"I would rather chug vinegar than read another one of Shakespeare's plays." (graphic..)

"This one [Taming of the Shrew] is super sexist. It's basically saying that girls can't stand up for themselves and they have to be quiet and reserved."

"I don't really have an opinion but Shakespeare was a mysterious dude. We don't even know if he was one person. Fishy."

"It's not that I don't like his plays it's that we're expected to find a literary device in every line of the play! I don't think it's that deep."

"There's nothing special about a dead guy who wrote about people dying." (harsh)

"His plays are just so predictable. That might just be because people from Elizabethan times were stupid uneducated and they wouldn't have understood such a complex play." (again. harsh.)

"Our teacher refuses to let us use translators so how are we even supposed to understand it?"

"The kids who said they like it are lying to themselves."

"I'd rather watch the Romeo and Juliet movie with Leonardo diCaprio than read the actual play, thank you."

"I haven't found a single character in any of the plays that doesn't make me want to strangle them. Except for Mercutio. He's chill." (MY CLASSMATES ARE SO WILD)

"Once you understand them, you realize that Shakespeare's plays are extremely complex and well done. Barely anyone can develop such a perfect plot."

"Okay some of them may be kind of lame but some of them are super interesting. Like Julius Ceaser, that one's my favorite."

"You can apply so much of it to real life! Juliet picking the wrong guy, Katherina not getting a suitor just because she's not like the average girl, it all fits in with our modern life in a way."

"He captures the human condition exquisitely. He understands human flaw, human pain, and how that affects our actions."

"It's all so very romantic and poetic. Especially the balcony scene in Romeo and Juliet, I cry every time."

"The man invented words. Like he made up his own slang. Enough said."

Ninth graders really aren't a fan of Shakespeare. To us, it's hard to understand, and with all the work our teachers give us on it, it doesn't really make it fun? But we're able to recognize the genius of Shakespeare, and how his work was truly great.

also my classmates are truly brutal. and hilarious. ah.