five book genres that i will never be able to read 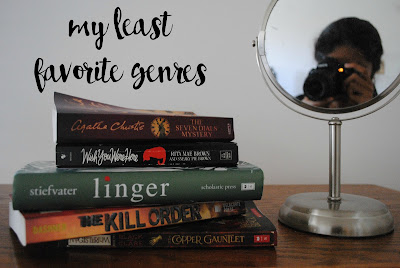 this picture is so sad but hey its me

My personal favorite genres are fantasy and contemporary, and I tend to not read outside of those genres.... IT'S BAD. I KNOW.

Occasionally I'll pick up another book that's sci fi or historical fiction but there's a few genres I will NEVER touch.

Of course, it's not like these books aren't good or well written, it's just that I personally don't find them interesting or fun to read. SO PLEASE PLEASE DON'T TAKE OFFENSE FROM THIS LIST <33

I HATE BEING SCARED. More importantly, I would not willingly scare myself. I don't watch horror movies either because I don't want to pay to lose my dignity in a theater. No thanks.

When I pick up a horror book and the first page says "based on a true story", I lose all of my sanity. I can just look at the demon clown on the cover and not be able to sleep for a week. I don't care HOW good It and Steven King novels are, I will not read It.

I don't care if it's Halloween, I don't care if "it's not so scary" (because it usually is), I don't want to "face my fear", and I really don't care if there's a happy ending because THAT DOESN'T MAKE THE THINGS IN THE MIDDLE LESS SCARY.

the classic boy and his dog stories

THEY'RE CUTE. YES I LOVE DOGS. YES I LOVE KIDS AND DOGS. but they're all the same story. The boy finds a lost dog, it becomes his best friend, and then it runs away or dies. AND THE BOY GETS OVER IT SO FAST? like did he ever have a dog? I don't think he seems to remember.

AND MY HEART IS IN PIECES ON THE FLOOR. I remember reading Shiloh in the fourth grade and petting every dog I saw on the street for months because I was just so heartbroken.

there's also always something about summer?? My next post is going to be all the similarities of dog books. The list will be ENDLESS.

They're too.. short? YES I KNOW THEY'RE SHORT STORIES. But there's just not enough time to fit everything in? I've only read a few short story collections and I honestly did not finish half of them because I got bored and there was just too much story for one book but not enough story for each story.

HOW DOES ONE NOT WANT TO WRITE MORE. I mean you see my blog I just have so many words and so many things to say I couldn't possibly fit an entire story in 10 pages. Plus I am so obsessed with character development that THERE JUST WOULDN'T BE SPACE. ugh.

Surprisingly there aren't that many western YA books out there or maybe I don't know because I've only read one. And it was basically people on horses saying y'all. I'm not being stereotypical it was literally about a lost horse and it was set in 1845. There was actually a gun fight at the end over the horse.

And I'm not even sure how entirely accurate half the things are? If you're not American, please do not rely on Westerns for information on American history in the 18th and 19th century, people were not running around having fights with guns. actually i'll get back to you on that..

I used to LOVE LOVE LOVE dystopia novels, it was everything I read as a 10/11 year old, especially because dystopias were extremely popular at the time.

But honestly, I don't think I've read a dystopia in FOREVER, the current series I'm reading is the first dystopia I think I've read since 2015. Because like the dog/boy stories, they're all the same.

What are some of your least favorite genres? What's your GO TO genre? How do you feel about switching it up to reading a COMPLETELY different book?